What are Trichomes on weed? Trichomes are one of the most important biological components found on the cannabis plant. They serve as the manufacturing facility for cannabinoids – the compounds responsible for the effects we enjoy when we consume dry cannabis flowers or extracts.

Lets analyze the powerful impact these vegetable structures have, which come from cannabis. 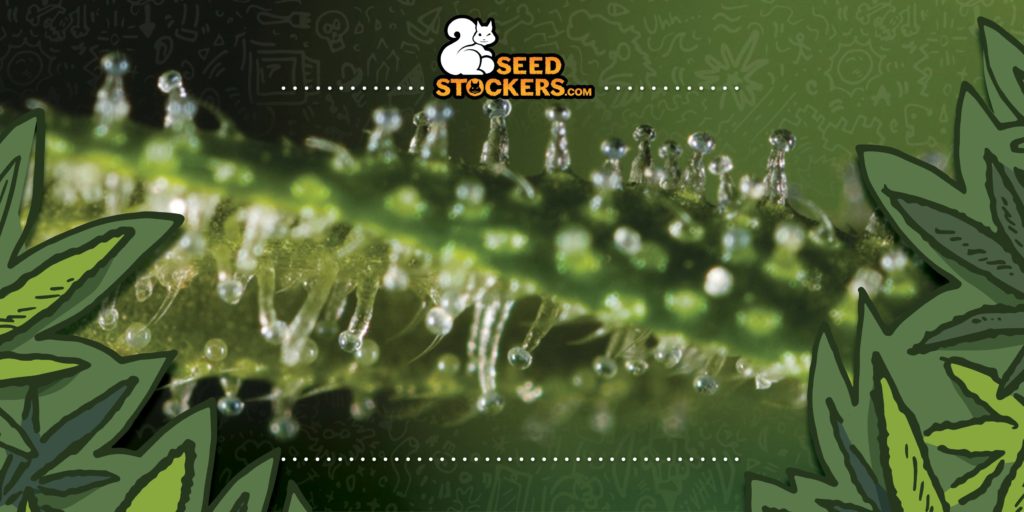 What are Trichomes on weed?

In botanical terms, trichomes are hair or scale-like protrusions on the surface of the epidermal cells of certain microorganisms, algae, and plant species. Many trichomes, including marijuana trichomes, are “glandular,” meaning they secrete oils and other natural substances.

When you look at cannabis buds with the naked eye, trichomes are the light, white, or amber specks on the outside of the flowers and leaves that appear dusty or shiny, and are sticky to the touch when handled.

In nature, trichomes exist in many shapes and sizes, but there are three kinds that appear on cannabis plants:

Bulbous trichomes are the smallest (10-30 microns wide) and appear on the surface of the entire plant. They are small enough to be made up of only a handful of cells.

Sessile capitate trichomes (which do not have a peduncle) are slightly larger (25-100 microns) and contain both a very short head and base. They are much more abundant than the bulbous ones, but they cannot be compared with the abundance and size of the third variety.

There are the pedunculated capitate trichomes, which can reach between 50 and 500 micrometers wide and can be seen with the naked eye or with a small magnifying glass. They are recognizable as the iconic mushroom-shaped trichome – a stem that supports a bulbous head.

In fact, its structure consists of a stem composed of epidermal and hypodermic cells that adheres to a large glandular head, which is held together by a layer of waxy cuticle that acts like skin, and serves as the epicenter for the synthesis of cannabinoids, terpenes and flavonoids. Trichomes are hair or scale-like protrusions on the surface of the epidermal cells of certain microorganisms, algae, and plant species.

The function of marijuana trichomes

Trichomes act like little factories that produce and store the compounds that give cannabis its potency, aroma, and flavor.

In general, the more trichomes on the bud, the higher the cannabinoid content and increasing the potency of the effects when properly harvested and preserved. However, trichome count does not concretely determine cannabinoid quantities as trichomes found on some varieties of cannabis might have the capacity to produce different amounts of cannabinoids per trichome.

Cannabinoid synthesis begins with flowering and trichomes appear. At this point, the cells within the head of the gland begin a conversion through biosynthesis and form precursors of what will become cannabinoids, terpenes, and flavonoids. They do this using enzymes that catalyze a series of chemical reactions to produce complex molecules from simpler molecules.

The speed and concentration with which a plant produces trichomes will depend on both genetics and environmental factors, since variables such as ultraviolet light greatly affect the synthesis of cannabinoids within the head of the trichome.

Trichomes benefit the plant in many ways, as they are the first line of defense against a number of external environmental threats. During the flowering stage, cannabis plants are very attractive to many insects and animals. Trichomes produce cannabinoids and terpenes whose bitter taste and pungent aroma serve to deter them.

They also create a physical barrier to protect plants from high winds, low humidity, and even some types of fungi. They also offer a degree of protection against the sun by blocking or reflecting potentially harmful ultraviolet rays. 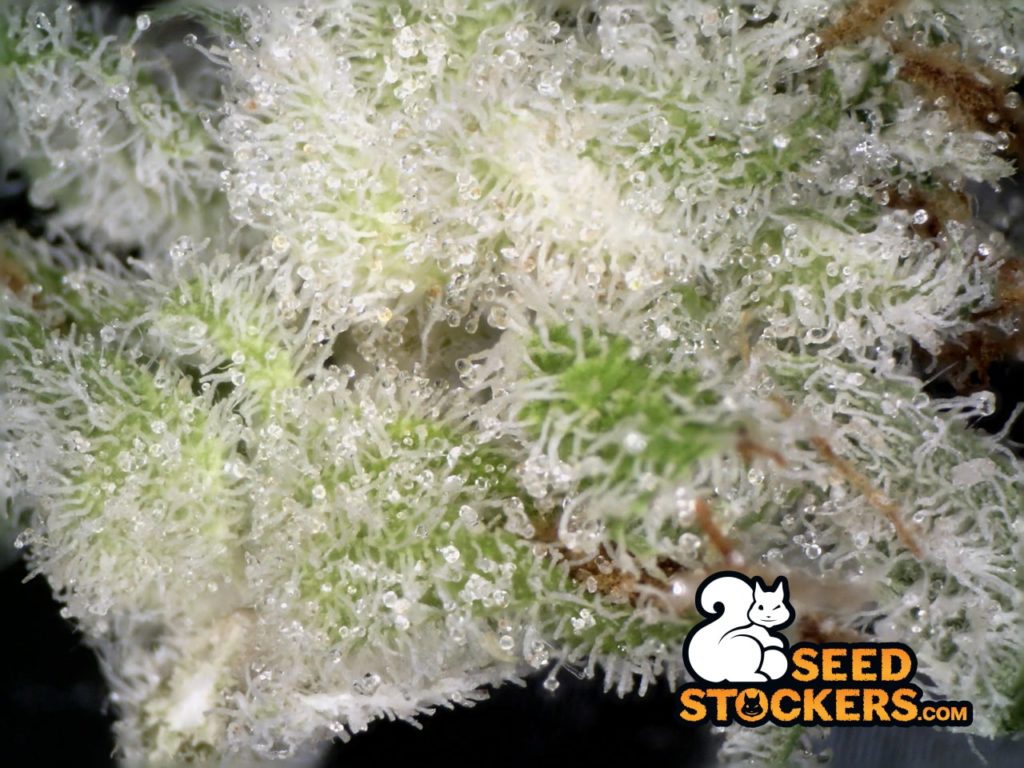 Cannabis is a particularly hardy plant that can be grown outdoors in a wide variety of harsh conditions. And trichomes contribute greatly to its success in nature.

When to harvest marijuana trichomes

Cannabinoid synthesis begins in the plant with CBGa, the acid precursor by which all other phytocannabinoids are created. The CBGa is then transformed into THCa, CBDa or CBCa through specific enzymes.

Cannabinoids are changeable by nature and continue to transform when exposed to light or temperature. So the color of the trichome is related to the maturation stage of the plant. In fact, in the right acidic conditions CBD can even cycle around to become THC.

– An early harvest results in underdeveloped trichomes that are clear or transluent, resulting in herb that is likely to be less potent, flavorful, and aromatic.

– When the trichomes change to a milky white color, this is a sign that the trichomes are now rich in THCa and that the plant is reaching full maturity.

– If you mainly see amber colored trichomes, then the cannabis flowers are overripe and cannabinoids like THCa have started to degrade.

Over-ripening with prolonged exposure to light causes THCa to skip conversion to THC entirely and to become CBNa. While THC has a euphoric and cerebral high, cannabinol (CBN) has sedative physical properties, resulting in a more narcotic marijuana.

How to harvest marijuana trichomes

Sifting is one of the easiest ways to collect these glands for consumption. The simplest version is one that is carried out dry.

It is a common technique practiced in countries such as Morocco or Afghanistan, which consists of rubbing the dry plant material on a fine mesh. The size of the openings in the sieve determines the size of the glands and the amount of residual plant material that will pass through.

On the other hand, the method known as ice-o-lator, ‘bubble hash’ or ‘water hash’ uses ice extraction to perform the same task, immersing the plant material in ice water and then shaking to release the trichomes, which they are collected in filter bags.

Trichomes are fat soluble, they do not dissolve in water; When trichomes are cold they become very brittle and easily break off. By adding ice to the mixture we make the extraction process easier to complete with efficiency.

Ultimately, neither of these techniques is better than the other across the board. Both result in unique products which have their own characteristic appeal. 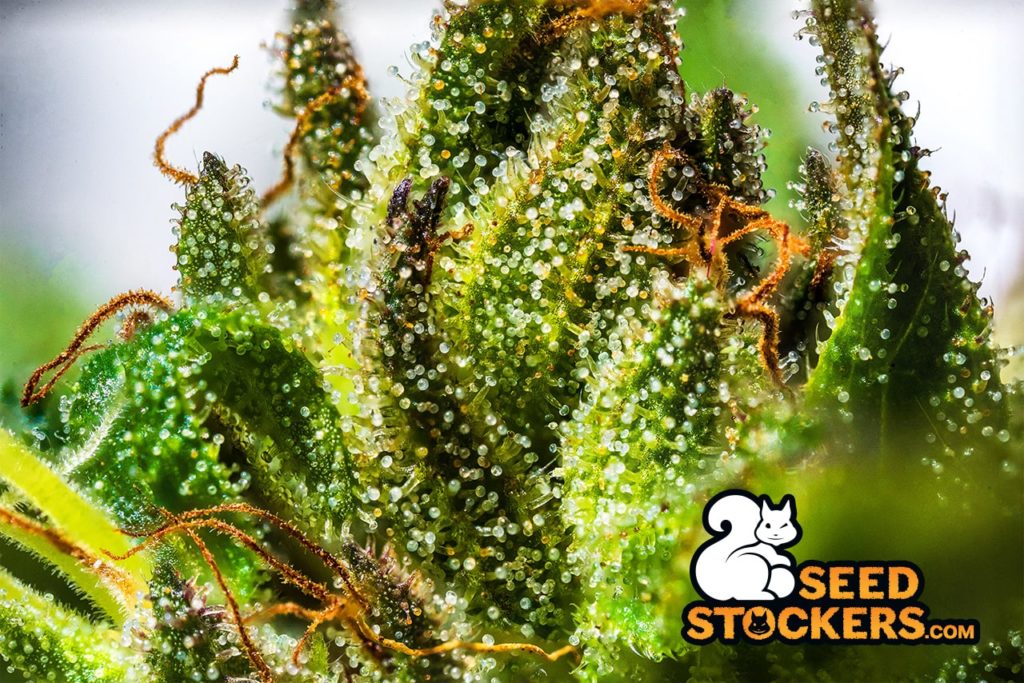 How to store marijuana trichomes

The importance of trichome curing and storage is not that different than it would be for flowers, as under ideal conditions it will improve its flavor and smoothness and enhance its potency.

It must be taken into account that trichomes are vulnerable to heat, high humidity and, above all, to exposure to sunlight, since ultraviolet (UV) radiation causes chemical instability and the collapse of active substances.

In the case of dry extractions, as with buds, the best way to cure and store is in airtight jars in a dry, dark place with mild temperatures.

In the case of wet extractions, storing them immediately in a dark, closed environment can cause fungus. To avoid this, it is essential to let the shelled material dry for at least a week on a surface or in a space where it does not accumulate dust or receive light.

The drying and curing process is not the same as storage, but they work together to bring you to the end of a job well done. So don’t let your trichome extraction get too dry or cure in poor condition if you want excellent quality product.